The Main Thing…
At HoopStar we’re students of the game, we have played and coached at every level.  We have competed for National Championships as a player and a coach.  We have experienced what it’s like to struggle to win games as both a player and a coach.  We have been the best player on teams and have been cut from teams.  Through our careers in basketball we have had the opportunity to study and learn from some great basketball minds and teachers of the game.  Our vision is to train athletes in the skills that will allow them to achieve success in basketball and lead a fulfilled life after basketball.  The game will not end. 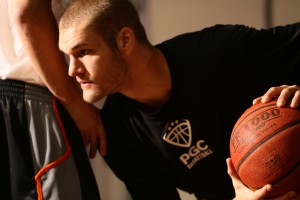 Favorite Quote: “Don’t be afraid to give up the good to go for the great.”  -John D. Rockefeller

Kyle Coston, director of training with HoopStar works with athletes to make lasting improvements in a three progression philosophy of teaching.  See – Do – Compete methodology is set in place for the athlete to really develop the How along side with the Why of each skill set.  Throughout each session we take a part of the game and break it down to the bare bones; once it is time we add layers on top each other until the skill is born and the athlete really understands the when and where they would use it in a game.
In 2006 Kyle led his high school team to the 2A league, district, and state championship’s where they were unscathed by opponents and came away from the experience champions. Kyle was named League, District, and State MVP as well as Whatcom County Player of the Year for 2006.  As well he was the Associated Press Washington State 2A Player of the Year for all sports.
Kyle then took his journey to Portland State University, where he started as a freshman.  Playing under Ken Bone, they went to the NCAA Men’s Basketball Tournament 2 consecutive years playing as a 16 seed Kansas, then the following year as a 13 seed going against Xavier.  He was named to the 2009 All-Tournament team.  In his second year he shot 52% from the 3 and was ranked top 6 in the country for field goal percentage from 3.  From there he went to play at Trinity Western University where he hit the game winning 3 in the National Tournament to go to the Championship game.  He was an All-Canadian who led his team and was the 2011 National top scorer with 24.5 ppg.
He then took his talents overseas to play professionally from South America to Asia and Europe and finally to New Zealand.